Today I presented and defended my senior thesis on my physics research to the SMU physics department. Anyone who has spoken to me the last few weeks knows that my thesis has basically taken every waking moment of the last few months to complete, and I can finally rest knowing that I have passed and it is complete.

My senior thesis has an incredibly long and somewhat tedious name: "Heavy-Flavor Jet Substructure Analysis of H^0 to gg using the ATLAS Experiment and Charm Jet Tagging at the Electron-Ion Collider." Quite the mouthful to try and repeat to people. I am proud of not only completing the paper, which is a lengthy 48 pages, but also defending my thesis on the results of the last two years of my physics research at SMU.

I began this project back in the spring of 2019 when I joined Professor Stephen Sekula's research group at SMU. At the time, then-graduating-senior Rebecca Moore had been exploring simulation rates of Higgs to gluon decays, in particular ones that resulted in four bottom quarks in the final state. She was graduating and Professor Sekula was looking for another undergraduate student to jump in and continue the work. I was eager to join a high energy physics research project, especially one that involved computation and experimental work. Ever since then I have been working with Professor Sekula on his research with the Higgs at the ATLAS Experiment and with new research ambitions with the Electron-Ion Collider.

The past two years of research have empowered me to pursue a Ph.D. in physics and continue conducting research in high energy physics with an emphasis in collider physics analysis projects, similar to the work that I present in my senior thesis. High energy physics is pushing the frontier of what is possible in the areas of data analysis, machine learning and computation advancements due to the enormous amount of information gathered by particle colliders. I look forward to continuing my research in these areas as high energy physics continues with the next generation of experiments such as the High Luminosity LHC and the EIC.

I attended my final honors convocation at SMU. One of the first in-person and socially-distanced indoor university-wide event since the pandemic began, the honors convocation was a celebration and ceremony recognizing the many acheivements of students throughout this last year. I was recognized for several accomplishments and awards, but two awards in particular were really important to me.

Secondly, I was recognized as the Dedman College Outstanding Senior, the top award given to a single graduating senior from the Dedman College of Humanities and Sciences. The chairs of all the departments in Dedman College come together each year and select one student that they believe represents the idea behind a liberal arts education that values both humanities and sciences. Of course, my friends and I would joke that it doesn't hurt that both the chairs of the physics and political science department are my two closest professors and mentors, but receiving this award was clearly a recognition of my outlook on my time in college and the role of a liberal arts education. College is not just about studying for the sake of getting a job, it is so much more than that. So many students spend their time in college focused on learning what they need to in order to contribute to society, but don't step back to think about how a broad education betters society. An appreciation for history, art, music and culture is extremely important, even for technocrats, and SMU has numerous resources to encourage students to explore more than their degree.

I also got a hilarious and serious shout-out from one of my favorite professors at SMU, Professor Jospeh Kobylka, chair of the political science department, in his speech at the honors convocation. I've known Professor Kobylka since I came to SMU, since he has served as the faculty sponsor for the President's Scholars program, but I also came to know him when I took his course on "Law, Politics, and the Supreme Court" in the spring of 2019. The class was quite the workload, but it was an incredible exprencience and explored a passion I had for constituonal law and debating the role that the law and a judiciary plays in society. He always finds it silly that a physics student, and one-day hopefully a future physicist, would have an interest in the supreme court and constitutional law. I love telling people that it is exactly the kind of education that liberal arts colleges should be encouraging. Scholars can, and realistically do have, more than one academic interest and they should be encouraged to explore it while in college. 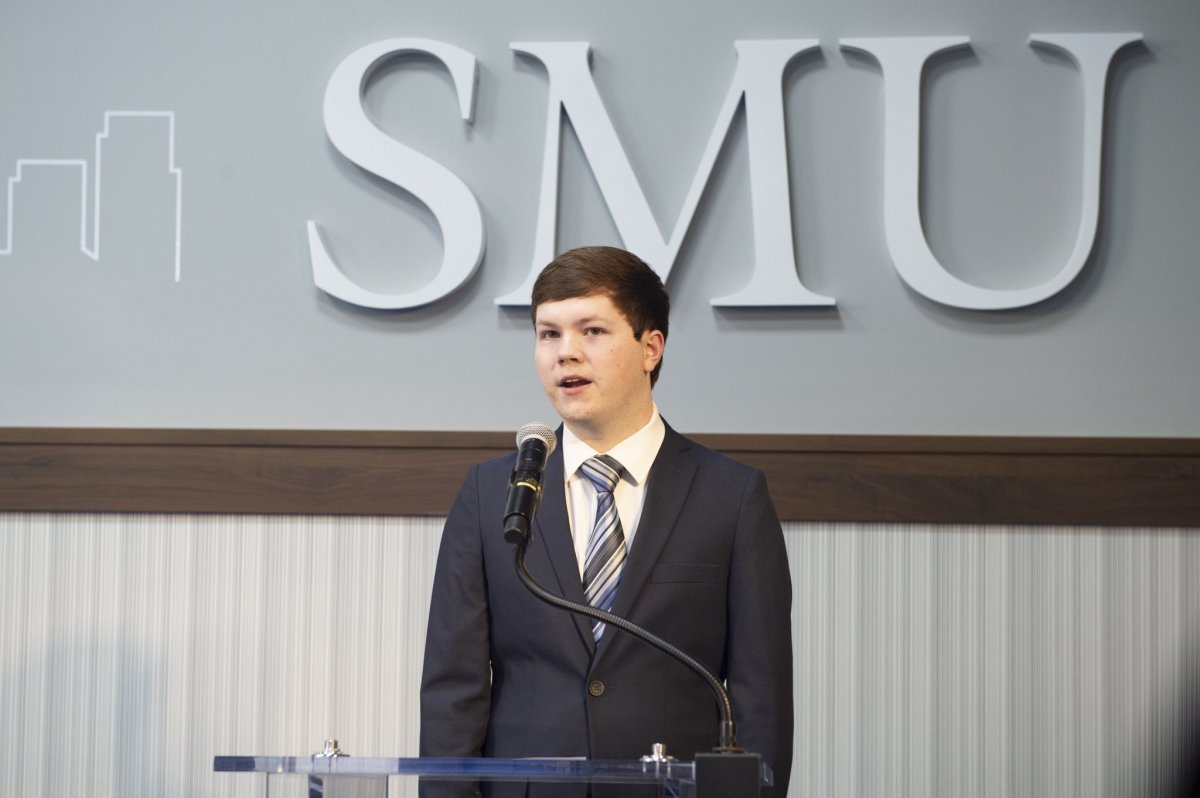 Every year, the SMU Board of Trustees selects a group of students for a formal dinner with the board to learn about students and hear students' experiences and feedback on the campus life. In a pandemic, student feedback is of the utmost importance, so despite the circumstances, SMU was committed to having students who met with the Board of Trustees at the board meeting in February. The event was virtual due to the pandemic with zoom rooms set up for conversing with tables, similar to how a dinner would work, and then a large zoom room for the evening presentations. Amongst the group of SMU students invited, five students are chosen to give a 5 minute speech about their experiences at SMU and to speak to the entirety of the board. I was one of those five students chosen and it was an incredible honor to speak to the board and my fellow peers.

I was able to go back and watch speeches from previous years and I even got to see what some of the others' speeches looked like for this year, and I saw that each person brings with them their own agenda. Well, agenda is perhaps too strong a word and certainly too negative a connotation. What I mean is that often students use their time to advocate for a particular cause or speak to an issue that affects them on campus. Finding my "agenda" was something I really struggled with because I honestly didn't want to spend my time talking about those kinds of things. There are issues I have seen on SMU's campus and I am glad that others were choosing to highlight them and advocate for the board to address them, but for me I've been spending my recent time reflecting on how many opportunities I have had at SMU to explore and learn, and so I made that the topic of my speech.

I wanted to use my speech to connect what I have done at SMU to where I am going with my future, and how the opportunities at SMU have made this possible. I talked about my experiences with the study abroad department, and even later got to answer a question about what area I would want SMU to invest more in, which I suggested that affordable study abroad is essential for our community. I also spoke about my academic interests, and how a liberal arts education, with both the university curriculum and the honors program, afforded me the opportunity to explore topics outside of my degrees and find passions for learning beyond my future career path. I believe it is really important that the board members hear that many students do appreciate the liberal arts education and do appreciate the opportunities on campus for an expansive learning. I am very grateful to be invited to speak to the SMU Board of Trustees and I hope to continue being able to tell my story.